A smoke detector or smoke alarm is a safety device that senses and detects the presence of smoke in a structure and warns the occupants of the possibility of fire. They are easy to install and are very important for the protection of your family and home. According to the US Fire Administration, “installing a smoke alarm on every level of your home will significantly decrease the chances of a resident dying in a fire”.

During a residential fire, smoke and dangerous fumes will often spread faster than the heat or flames. Most fire victims die from the inhalation of these toxic fumes when they are asleep, not from the fire itself. About two-thirds of residential fire deaths take place in homes where there are no smoke alarms or have non functioning smoke detectors. Properly installed and maintained smoke alarms are considered to be one of the best and least expensive ways of providing an adequate warning during a potentially deadly fire.

There are two types of smoke detectors that are offered to homeowners. They can either be battery powered or hard wired into the power supply of the home.

Photoelectric Smoke Detectors – Uses a special optic sensor to detect smoke particles. If the optics are disrupted or lessened to any degree by smoke particles, the alarm will trigger. Better at detecting smoldering fires with larger particles. 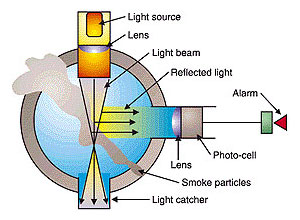 Ionization Smoke Detectors – Emits minute amounts of radioactive material (Americium) in a small chamber of the detector, creating an electric current. If a fire is present, and the current is disrupted within the chamber, the alarm will trigger. Better at detecting smaller particles. 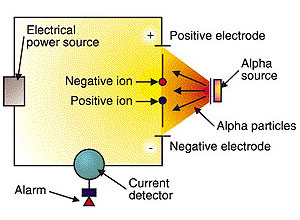 The majority of smoke detectors and alarms in American homes use  a simple 9-volt battery for power. Smoke detectors can, however, utilize a lithium-ion battery that should last the life of the detector (usually 8-10 yrs). Whichever battery type is chosen the minimum guidelines are as follows (According to the National Fire Protection Association):

Battery-operated smoke detectors have a distinct advantage over hard wired units. That is, if the power goes out, they will stay active. They are also cheaper and more convenient to install. These advantages will only stay in effect if the batteries are replaced in a timely fashion each year.

Where to place Smoke Detectors in your Home

The most important thing about smoke alarms and detectors is that they save lives. Keeping them maintained and functioning properly should be at the top of every home safety list.